If you ever visit Huckleberry’s Natural Market in Spokane, Washington, you might see Stacy Cossey there holding a large sign which reads, “Honey-bees Unite for I-735.” Stopping to talk with her will reveal that she is also wearing a shirt that reveals more about her quest: “I-735: Get BIG money out of elections!” Stacy spends much of her time collecting signatures around Washington, but her story is not a typical one.

Stacy Cossey spent 27 years as a stockbroker on Wall Street. Prior to the subprime mortgage crisis, she saw what was coming and urged her clients to get out of the stock market and put their money in silver and gold instead. Although this led to her losing nearly two-thirds of her income, she saved her clients from severe financial losses when the crash hit in 2007 and 2008. This also led to an epiphany that changed her life.

Because of her deep involvement in the financial world, she was able to see up close and personal just how extensive the political, economical, and social injustices were that came from the unbridled power and control of big corporations. As she began to research and write about her discoveries in the way the financial world actually worked and how greatly it differed from what we were led to believe, she knew that she had to make a change because of her own role in the system.

Now she organizes grassroots operations to make real changes in the financial world. When she learned about what the Washington Coalition to Amend the Constitution (WAmend) was doing with I-735, she was excited to join their efforts to prevent the continuing growth of wealth and power that exists in just a handful of the population. They had plan to make real change, and Stacy was hooked.

The biggest problem today is that corporations were given the right to corporate personhood in which they can exercise the same constitutional rights as individuals. Although corporations have had these rights for over 100 years, the Supreme Court ruling in the FEC vs. Citizens United case in 2010 changed things significantly. Now, corporations are able to give unlimited and confidential Super PAC contributions because they have been allowed to spend money as an act of free speech according to the 1st Amendment.

These contributions allow corporations to “buy” elections, and it is seen frequently throughout the United States and at every level. Furthermore, it could be argued that the rights given to corporations under the 4th, 5th, and 14th Amendments also give the right to corporations to degrade and pollute the environment. This could potentially open up a whole different metaphorical can of worms.

WAmend, however, was created and is funded and motivated by average people. They are fighting back against big corporations and the government decisions to say, “Americans will NOT stand by and watch this happen!” WAmend is affiliated with a large network of various organizations such as Move to Amend and the Community Environmental Legal Defense Fund who are all working to build up enough strength to take on the big corporations and get the power back into the hands of the people.

WAmend believes that we need a constitutional amendment to make sure that it is the citizens and only the citizens that are given rights to be called “We the people” and to be given the rights that are expressed in the US Constitution. The primary point in the proposed constitutional amendment is that money is not allowed to be a substitute for free speech in the 1st Amendment which would help to prevent corporations from buying elections.

Additionally, the proposed amendment will allow political contributions as well as expenditures by candidates and politicians to be monitored and disclosed to the public which will further help prevent the influence of corporations in politics. Once WAmend has collected the 330,000 signatures that they need, they will be able to get the amendment on the ballot. Once it is passed, Washington will be able to join the other 16 states that have already gone on record to call for this constitutional amendment. 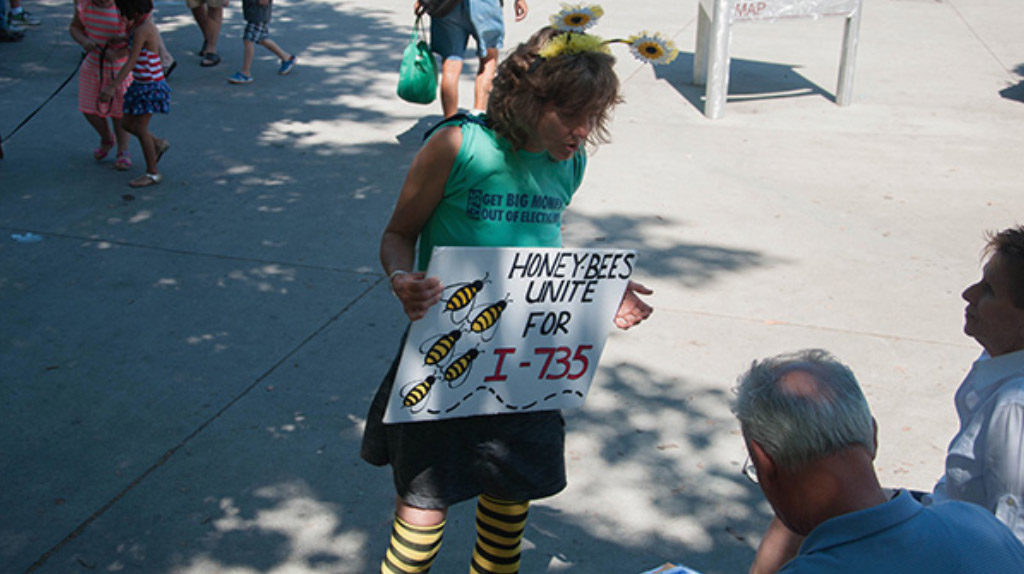 As Stacy explains, “GMO labeling Initiatives are one of the most visible misuses of our First Amendment rights. Two years ago, here in Washington State, we had a GMO labeling Initiative. Washington state voters put in $9 million to buy advertising to encourage other voters to support labeling, while out of state, multi-national corporations through their Super PACs shelled out $33 million dollars. They bought the election! What made it legal is that they had our rights, which they used against us. This same scenario was then repeated in California, Oregon and Colorado.”

While the state of Vermont spoke up loud and clear and was the first state to pass an initiative requiring GMO labeling, they are now facing a lawsuit brought by Monsanto and the Grocery Manufacturers Association — a food industry front group that includes Coca-Cola, General Mills, Dole, Kellogg’s, Monsanto, Bayer, Dow, Syngenta, BASF and hundreds of other corporate entities. Outrageously, both the GMA and Monsanto individually are now claiming that complying with labeling would be a violation of their First Amendment rights.

People everywhere want fresh air and water, healthy food, a clean environment and a good economy. Corporations everywhere want profits. Most are not shy about making hefty political contributions in order to buy favors, and it is these favors that allow them to pollute our environment, often even putting people’s health at risk just to ensure the bottom line. But unlike people, corporations don’t need to breathe and eat, or find a job to survive.

So it is up to us. We the People must unite. We have to act and speak out to protect our country and our world. This is the civil rights movement of our day, a movement that aims to bring back the very rights of “We the People” envisioned by the founding fathers. While the citizens of Washington State may be in the spotlight at the moment, they can’t take on corporate power without the help of the rest of us. Financial support is essential, but so is volunteering and activism to get out the word.

As Stacy points out in her tireless pitch for signatures, “Since some of the biggest abusers of our First Amendment rights are the chemical companies, we think the bees are with us on this one.” Yes, we think so too!

If you live in Washington, the initiative still needs signatures to be passed. Click here to find out where you can sign. The deadline is December, so sign today!